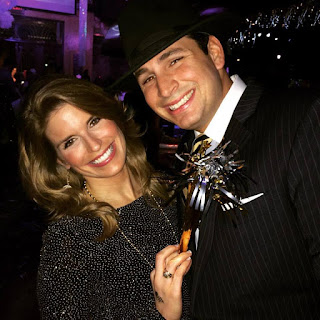 Even though I'm not much of a resolution-maker, I must say I was anxiously awaiting the arrival of 2016. Last year was just flat out crazy. I felt like my mind was constantly spinning and I could never get caught up on my sanity even after the wedding was over. That kind of big event can create aftershocks that last for months, especially when you have a busy schedule ready to greet you the second you deplane from the honeymoon.

Although stressful, 2015 will always be special, March 7 in particular. It's hard to believe it's already been 10 months, when it feels like 10 minutes. It's sad to know this monumental moment will never happen again, and it will probably be a very long time before I have all of my best friends under one roof again. Many of them had babies last year, so I know 2015 is one we will all never forget. But at the same time, 2016 comes with a huge sigh of relief knowing, barring something unexpected, I have a much calmer year in store.

As we were ringing in the new year, I saw many people posting all of their goals and resolutions. I was overwhelmed reading them- much less imagining trying to achieve them on top of the stress of daily life. This must be why many resolutions fail. I'm sure in some cases it's a lack of commitment and dedication, but in a lot of ways, we simply don't have the time and energy to be Super Resolution Barbie 2016. In one sense, shouldn't we be resolving to do LESS and enjoy life more?

Huge aspirations aside, let's run through what most of us are already doing in our day-to-day life. It's probably some combination of things from this list:

Now put a bunch of pressure on yourself to fulfill a daunting resolution on top of all of that. Cue anxiety attack.

Let me point out setting goals is very important. I think it's a great idea to lay out objectives at the beginning of the year and work toward them with commitment. But let's be realistic. Maybe it makes more sense to choose one or two items on that list and improve upon how you do them rather than adding 10 more.

I'm getting to the point where I want to resolve to give myself a break. And I don't mean time alone, vacation, relaxation, etc...that sounds too, but I mean a break in my own head. I often beat myself up over not being productive enough and finishing my to-do list. But sometimes it's okay to take a day, (or five) to be a little lazy. It's so hard for me to do that because I sit there thinking about all of the things I should be getting done.

But the truth is, stress and lack of sleep are detrimental to our health. Rest is important, even though our 24/7 society would have us believe otherwise. If you hop on social media and you're likely to find someone who has climbed Mount Everest and read War and Peace by noon and you're still in your pjs...which makes you feel like a huge slacker.

There is a lot of pressure... and if we're honest with ourselves, we'll realize a lot of it is self-inflicted. There isn't a to-do list master who comes to punish you for not cleaning the bathroom nor will you turn into a pumpkin if you don't fold the towels right now. Take a nap, read a magazine, watch three episodes of "The Leftovers"...yes, the bathroom will still be dirty and the towels will still be in the laundry basket when you're done, but the world will still be turning. If you're getting anxiety just thinking about leaving that stuff undone, I know, I am right there with you. This doesn't come easy for me, either.

I wish you a 2016 of not being a slacker, but just cutting yourself some slack!