Whenever I'm asked to give talks to organizations about my job, I usually do a "Top 10 Things You Didn't Know about Working in Television News" because I find most people are curious and confused about we actually do all day. (Hint: It's not show up 30 minutes before the show and get our make up done.) One of the things I share during that talk is what a typical day looks like and how the workflow differs for each job position within a newsroom. Earlier this summer, I chronicled one work day. This day was a little different, because I filled in on our Suncoast View talk show. But it's not unusual at all for me to have some work-related responsibilities before my scheduled shift starts at 3 p.m., whether it be promo shoots, interview shoots for an upcoming story, emceeing a luncheon, or as mentioned above, speaking to community groups and organizations. I hope this gives you some insight into the "glamorous" job of a broadcast journalist. 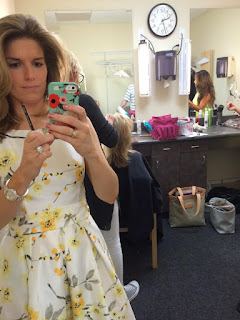 In the make up room getting ready to co-host Suncoast View
This show is unsual (read: lucky) in that a very generous hairstylist has volunteered to come in to do the ladies' hair. This unfortunately doesn't happen on any other ABC 7 show; we do our own hair. But when I sit in on Suncoast View and there's time, I get my hair done! It's the best treat possible. And no, we don't have make up people either. 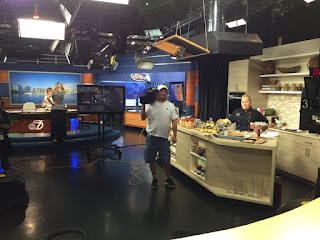 On the desk about to tape Suncoast View
While the newscasts I anchor at 5, 6 and 11 p.m. are live, this show is taped at 10 a.m. and airs at 4 p.m. It's live-to-tape, which means they don't stop and re-do segments. On the days I co-host this show, I don't get much sleep because I get done with work after midnight the night before. But it's worth it; it is a lot of fun! 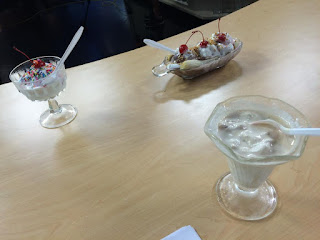 In the middle of taping Suncoast View - a segment on a local ice cream shop, Drago's
There are perks to this job! This ice cream was amazing. I got to try the salted caramel and it tasted like butter! It was absolutely delicious. 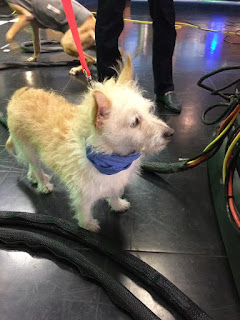 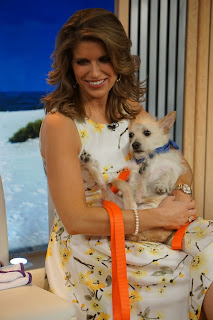 Suncoast View segment with adoptable rescue dogs
Any day I get to be on-air with pups is a good day! I wanted to steal this one. 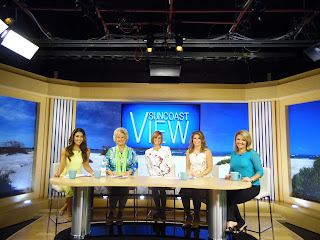 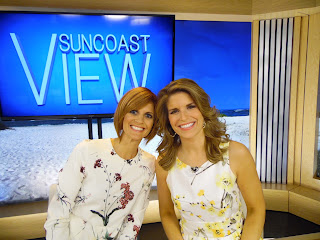 Suncoast View segment with local attorney Sara Blackwell
In television news, we cover just about everything...which is why within the course of an hour we did went from ice cream, to dogs, to legal issues in the workplace. 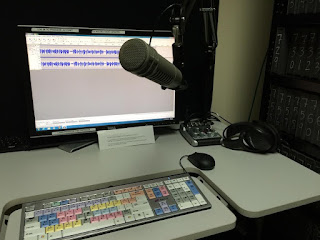 Writing and recording radio updates
After Suncoast View was done taping, I decided to get a head start on a few things because I knew the afternoon would be busy. Usually my co-anchor, Scott Dennis, and I split up pre-show updates, (one day I do radio, he does TV, and vice versa) but he was on vacation, so I had to do all of them that day. Each day, one of us writes a one-minute spot that previews what is coming up in our 5 p.m. newscast, record it and send to a local radio station. This must be in by 3:30 p.m., but I sent it early this day to free up more time later. 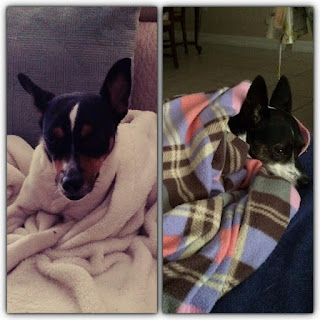 Break time!
I was able to head home for a little bit to take a rest with these sleepy snugglers! 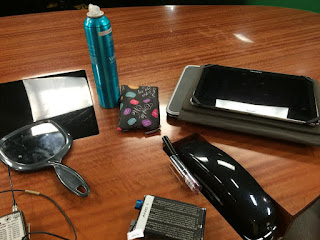 Taping afternoon updates
After getting back to work and touching up my makeup (remember, no make up people), it's time to tape TV "updates" that will air throughout the afternoon to promote what's coming up in our 5 p.m. newscast. 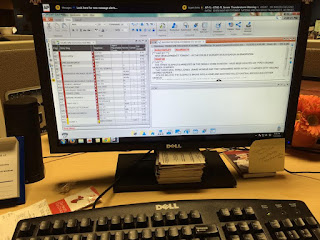 Reading through scripts for the 5 and 6 p.m. shows
At this point in the day, I get to my desk in the newsroom and read the scripts for the newscasts. I try to catch errors and make revisions to make the scripts written by the producers and reporters.

Live Suncoast View Cut-in
We do a short, live news and weather cut-in while Suncoast View is airing (the show I taped earlier). This photo shows Bob Harrigan at the weather wall. 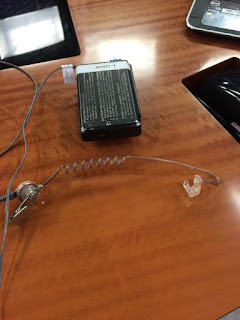 Second live Suncoast View Cut-in
This is another one of those things Scott and I would have split up had he not been vacation, but when we solo anchor, we do both cut-ins. Pictured is my IFB, which stands for interruptible feedback or foldback. It's the earpiece we wear when on air so that we can hear programming, as well as the producer, director and audio operator when they need to talk to us from the control room, or booth. The weirdly-shaped thing on the right is the earpiece that was custom-molded to fit my ear. I clip this on to the back of my collar and hide the curly-cue wire behind my hair. The black box is the power source. 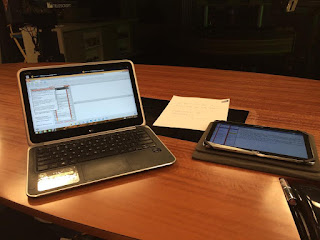 Anchor 5 & 6 p.m. newscasts
We're just a couple minutes out from the start of the show. Normally I would be co-anchoring with Scott, but as mentioned above, he was on vacation. I anchor for an hour and a half, which is a lot of talking but it goes by very quickly when you're reading every script. Before I started anchoring evenings, I did a two-hour morning show, Good Morning America cut-ins, radio reports and a one-hour noon show...by myself...every day. So this is nothin'! By the way, the tablet on the right is now what we use for our scripts. Previously we used paper scripts, but those have been eliminated. (Unfortunately, because we all know technology fails and that's not fun on live TV.)
We aren't able to edit the scripts in the program on the tablet, so we still need a laptop. Some scripts will come in late, so we'll read through those while on the desk throughout the newscast.

The start of the "E" Block
Newscasts are done in blocks separated by commercial breaks, starting with, obviously, the A Block. This is my view from the anchor desk. Straight ahead is the Suncoast View and ABC 7 News at 7 set. On the left is the kitchen used for on-air cooking segments. 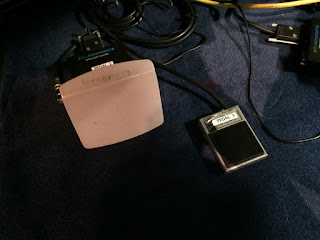 Tape early-evening updates
After the 6 p.m. show is over, I tape updates that will promote the 11 p.m. newscast during ABC prime time programming. This is a photo from under the anchor desk of the foot pedal we use to run the teleprompter. The left pedal is what advances the prompter, and much like the gas pedal in your car, the harder you press it, the faster the script goes. So you have to be careful! The square on the right is the button used to reverse the prompter if we need to go back.
After these updates are done, I usually take a dinner break, and on occasion, I have events to attend. If I have a special report coming up, I'll usually do some work on that in between the 6 and 11 p.m. shows. 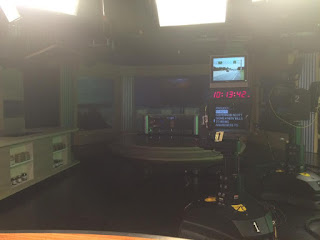 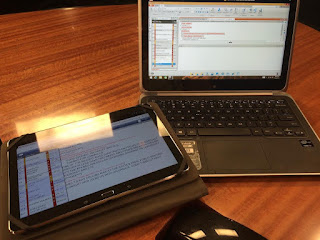 About to anchor 11 p.m. newscast
Finally, the last duty of the day! 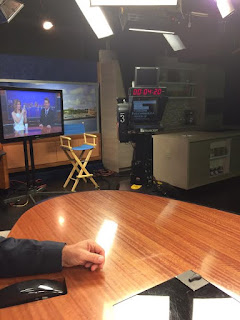 During a commercial break in the 11 p.m. newscast
I always solo anchor this newscast and Bob does weather. It's only 30 minutes long, so it goes by quickly. I took a picture of me and Bob in the monitor. There are several monitors around the studio, so we can see if we're on camera or what video is airing. After the show is over, I usually catch up on emails, tie up loose ends and then head home a little after midnight.


As you can probably tell, television news is not your normal 9-5 job! Since I started in news about 7 years ago, I've worked just about every shift there is --- mornings, nights, weekends, holidays...and sometimes all of the above in one week! When I was primarily a reporter, the workflow of my day looked completely different. It involved setting up interviews, going out on multiple shoots, writing a script and reporting that story in the studio or out on a live shot. While reporting can be extremely stressful and less predictable than anchoring, it's a an exciting job that involves becoming a mini-expert on a different topic every day and always meeting new people. I still feel like a reporter at heart, so I try to get out in the field to work on stories as much as possible. I'm a health reporter at ABC 7, so I focus mostly on medical stories.

While journalism does come with the drawbacks of any 24-7 business (sometimes working Christmas and having no social life ;), it does bring about opportunities and experiences I would never have otherwise. I cannot even begin to tell you the stories of the crazy things I've been through, good and bad! Many of us who work in TV daydream about more lucrative careers with better hours and less aggravation, but at the same time, we can't picture ourselves doing anything else.

Wow, what a busy several weeks it has been! I've been wanting to blog but haven't found a spare moment. Work has completely taken over my life and since I actually get paid to do that, I thought I should probably prioritize my real job over blogging. My goal is now to get back on track and hopefully even up my post quota. Thanks for reading!

LAQA & Co. Lip Crayon - This was a generously-sized sample, and I like that it's a smooth, crayon-like lip color. But I could tell just by looking that it was way too magenta for me! (I believe I got the Humble Brag shade.)

Ursa Major Fantastic Face Wash -- This has a great sweet/salty/minty smell that's like a mojito and/or margarita in a bottle depending on which scents you more strongly pick up. Either way it's a cocktail for your face. Since it's on the face for such I short time, I can't get overly worked up about face wash...unless is Liz Earle Cleanse & Polish, which I'm obsessed with. I wouldn't purchase this Ursa Major face wash because I much prefer the creamy types. My second favorite to Liz Earle is Lancome Creme Radiance Cream-to-Foam Cleanser.

Scalisi Skincare Anti-Aging Moisturizer Broad Spectrum SPF 30 -- I hate reviewing anti-aging Birchbox products because the samples are way too small to use long enough to know if there are any age-defying benefits. So while I can't speak to that aspect, I liked the consistency. It was kind of thick and creamy, but not overly heavy. It's great that it's SPF 30. The Birchbox website states, "it smells amazing- the faintly floral scent is a far cry from eau de SPF." I beg to differ. It smells like sunscreen with a hint of some other scent. I find it hard for products to mask that sunscreen smell, although you probably wouldn't want them to load up on fragrances just to cover it up. While I don't like that SPF smell at all, I suffer through it knowing it's protecting my skin and preventing wrinkles.

I am Juicy Couture Eau de Parfum -- I really like sweet smells, but I wouldn't say I love them for an everyday scent. I like a confectionery-like fragrances much more for candles than for perfumes.  This one was a little fruity, a little musky and a little woodsy. When I'm in the mood for a sweet scent, this is a good one. Although, I tend to like sweet scents that are heavily vanilla-based, and I don't get a lot of vanilla out of this one.

PARLOR by Jeff Chastain Smoothing Blowout Spray --  I cannot fathom how anyone with fine hair can use this! I HATED it! It turned my hair into a flat, greasy mess. I had to use multiple dry shampoos to breathe some life back into it. If I had had time, I would have re-washed it. This was just terrible. The Birchbox description said, "This Smoothing Blowout Spray ensures a beautiful result every time." No, it does not. "The lightweight spritz adds instant volume..." quite the opposite! I guess it MIGHT work for someone with very, thick dry hair, but for me, it was just awful.