It's Not Just a Headache: My Migraine Story 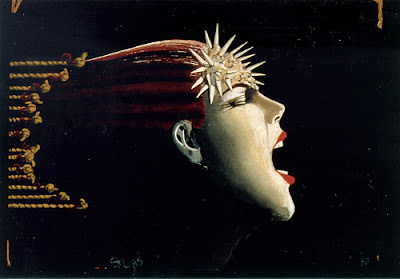 My mom first knew something was wrong when I was in 4th grade and my class was asked to write a short essay that started out, "If I could have anything in the world right now, I would_____." Most of the kids in my class wrote "get a million dollars," "fly around the world" and "get a puppy." I wrote, "go to lunch." As a child with big dreams who was already talking about anchoring The Today Show, my teacher knew this was odd and alerted my mom. Being a nurse, she realized I was probably getting hypoglycemic in between breakfast and lunch and not feeling well.

Many afternoons after school or evenings after dance class or swim practice, I would end up on the couch with an excruciating headache, nausea and an aversion to light and noises. I would lie there with an ice pack on my head while my family ate dinner, the smell of food further aggravating my upset stomach. While a lack of food earlier in the day is what caused this problem in the first place, eating at that point was completely out of the question. Plus, the headache was too far advanced and nothing but sleep would cure it. Luckily back then I was still able to sleep off what I now know, but had no idea at the time, were migraines.

I don't think I ever fully explained the scope of this problem to my parents. I've always prided myself on being a strong person who rarely shows signs of weakness. I only missed school when deathly ill and even then, if someone called the house while I was home, I would tell my mom, "Don't tell them I'm sick!" (Weird, I know.) Many nights before I went to sleep I would pray, "Please let me not get a headache tomorrow." Luckily at that point, I had been approved to have a snack in the nurse's office at school every day, which did help prevent some headaches. The following year my 5th grade teacher allowed the whole class to have snacks together so I wouldn't feel singled out. Boy, did everyone love being in my class!

It took until about halfway through college for me to finally be officially diagnosed with migraines. I think the reason it took so long was a combination of me not fully explaining my headaches and doctors not associating children with migraines, even though about 10 percent of kids have them.

I was prescribed Imitrex, which is truly a miracle drug for me. While not a cure by any means, my life would be dramatically different without it. Although it has side effects, it allows me to not be suffering in bed, non-functional, for 24+ hours. Pre-Imitrex, on those days when I had no option but to be somewhere even with a migraine, it was pure torture. I remember once in college I had to turn in a paper and just getting to the classroom was nearly impossible, even with help from my boyfriend at the time. I stumbled through campus, hanging onto his arm, having to stop every few minutes and sit down so I wouldn't throw up.

Migraine is a neurological disease, not just a bad headache. When you have a migraine, your whole body feels sick. Everyone experiences them differently, but the pain is usually on one side of the head and can be accompanied by nausea, vomiting, dizziness, fatigue, cognitive disturbances, and sensitivity to light, sound, touch and smell.

Mine often start off the same way: I get very tired all of a sudden. Then I yawn continuously and almost uncontrollably. After that, I get a strange feeling in my mouth, plus my newest symptom, I get really hungry. It's a hunger that feels like you could eat a whole pizza and it wouldn't go away. I've only had aura three times, which when you see geometric shapes and colors in your field of vision just before a migraine strikes. If you've had aura even once, your diagnosis is migraine with aura.

After all of those warning signals, the pain starts on the left side of my head, behind my left eye. The tricky thing is for me, it starts off dull so I always have this hope it will go away and won't turn into a full-blown migraine. That rarely happens. Acute migraine medicines work best when taken at the first sign of a migraine, and sometimes I make the wrong decision and wait too long, so it takes longer to kick in. (Read here why migraine sufferers sometimes skip their medicine.) Once the Imitrex takes away the pain, I'm not out of the woods yet. I experience symptoms of what's called the postdrome phase of a migraine: fatigue, weakness, difficulty concentrating and just an overall listless feeling.

Everyone's migraine triggers are different and from what I've read, multiple factors often combine to trigger an attack. Common triggers include stress, too little or too much sleep, weather pressure changes, heat and humidity, bright lights, strong scents, alcohol, and certain foods, especially those that are aged or fermented. Many of those triggers affect me, but my biggest trigger is not eating quickly enough when I'm hungry. Delaying eating is a 100 percent, guaranteed migraine. Also sure to cause a migraine for me, is running in the heat or right after I wake up. This is the toughest and most disappointing trigger for me because I love to run, but my head hates it. Both of those factors combined make trying to lose weight difficult, which is just another unfortunate side effect of my migraines.

The tricky thing about exercise and migraines is that working out is recommended to prevent and help manage migraines in the long-term, but if too strenuous, exercise can cause an exertion migraine in the short-term. This video highlights how indoor cycling may be the ideal workout for migraine sufferers because, unlike running, it doesn't have any pounding.

Over the years, I have tried many different preventative medications. I'm currently taking Toprol XL daily and Cambia before intense workouts. They've helped, but not enough, and my migraines have been more frequent lately. (Fluorescent newsroom and studio lights don't help and neither does the Florida summer!) I just got approved by my neurologist and health insurance company to have Botox injections. No, not for cosmetic reasons; it's been FDA-approved to treat migraines in more serious cases. Below is a look at where I'll have 31 injections in seven areas including, the trapezius muscle, head, neck and forehead. I'll have this procedure every three months and studies show I should start seeing more dramatic improvement after the second treatment. I'm optimistic about this and praying it works!

There is not one single day that goes by that I don't think about migraines multiple times. Did I eat enough today? Did I run too hard? Did I get enough sleep? My eyes hurt from these overhead lights, will I get a migraine in a couple hours? Should I have had that cocktail? Is this wine going to give me a migraine? I'm starting to get a headache, should I take my Imitrex? What if I take too much and it eventually stops working? Will massaging my neck help? If I have to go home sick, will my boss understand? What if this weather front give me a migraine? Having migraine may increase the risk of stroke, do I need to worry about that? I have big day tomorrow, I CANNOT GET A MIGRAINE!

I wrote this blog post because June is Migraine Awareness Month, and I know it's a condition that is quite a mystery to people who have never experienced it and even to medical experts who still don't have a cure or the answers to many questions we have about why we get migraines and how we can better treat them.  Mostly I want people to know, it's not just a headache!

Below is some interesting information I found on the Migraine Research Foundation website:

-Researchers still do not understand many things about the causes of migraine. They now believe migraine is a disorder involving nerve pathways and brain chemicals.
-There is also evidence that links a number of genes to migraine, so genetics is undoubtedly involved.  If one parent suffers from migraine, there is a 40 percent chance a child will suffer. If both parents suffer, the chance rises to 90 percent.
-About 18% of American women and 6% of men suffer from migraine, a total of about 36 million people in the United States.
-Estrogen adversely influences the brain receptors that play a role in migraine development. About half of affected women have more than one attack a month, and a quarter experience four or more severe attacks per month. More severe and more frequent attacks often result from fluctuations in estrogen levels.
-After puberty, migraine in women increases until age 45 or so, when it begins to decrease.
-Up to 14 percent of American women get menstrual migraine; the majority of these women also have migraine at other times of the month.  Menstrual migraine is usually more severe and harder to control than other types of migraine.
Posted by HAW at 2:46 AM