How I Said Yes to the Dress...and Survived Dress Doubt

It all started years ago, and many years away from getting married, when I was watching an episode of "Sex and the City" (clip above) with my sister, Whitney, and I told her, "If I could have that dress as my wedding dress, that would be perfect." Carrie was wearing a Badgley Mischka gown to a black & white ball, and it was simple but timeless and gorgeous. The ending wasn't quite that happy after Aidan suggested they run off and get married, but dang, that dress!

Fast forward to Christmastime 2013, a couple months after Max and I had gotten engaged. Our wedding was still more than a year off, but I knew it might be the best chance of me, my sister and my mom all being in the same place to go dress shopping. I made a few appointments and we went to a couple bridal boutiques in Atlanta. My brother-in-law even tagged along; he's a major trooper. But I will say it's quite helpful to have a guy's opinion in situations like these!

At the first place, I tried on just about every style, anything that caught my eye, plus a few selections that my mom and sister chose. I ended up finding one I really liked but I wasn't convinced just yet that it was the one. In the meantime, my mom kept bringing up Winne Couture, a beautiful bridal salon we passed by often when in Buckhead. Just by the looks of the place and the location, we figured it was probably out of our budget. But after checking the website, I found out they had two labels and the less-expensive one actually fell within my budget range.

So the day after Christmas we were nearby at Lenox mall and my mom was insistent we stop by Winnie Couture just for the heck of it. I called and found out they were open for about another hour, so we went with no appointment and definitely no intention of leaving with a dress. But the ladies at the store did warn me three girls had found their dress earlier that day!

I started looking through the racks and the sales girl said to feel free to try on dresses. So I picked out a few and then as we were heading to the dressing room, another one caught my eye. The crystals on the neckline sparkled from halfway across the room. I almost didn't try it on because I couldn't exactly get the idea of what it looked like from the hanger. But why not? Might as well. Then the girl helping me let me know that the dress had just come in that day and I would be the first person to try it on. It was meant to be. 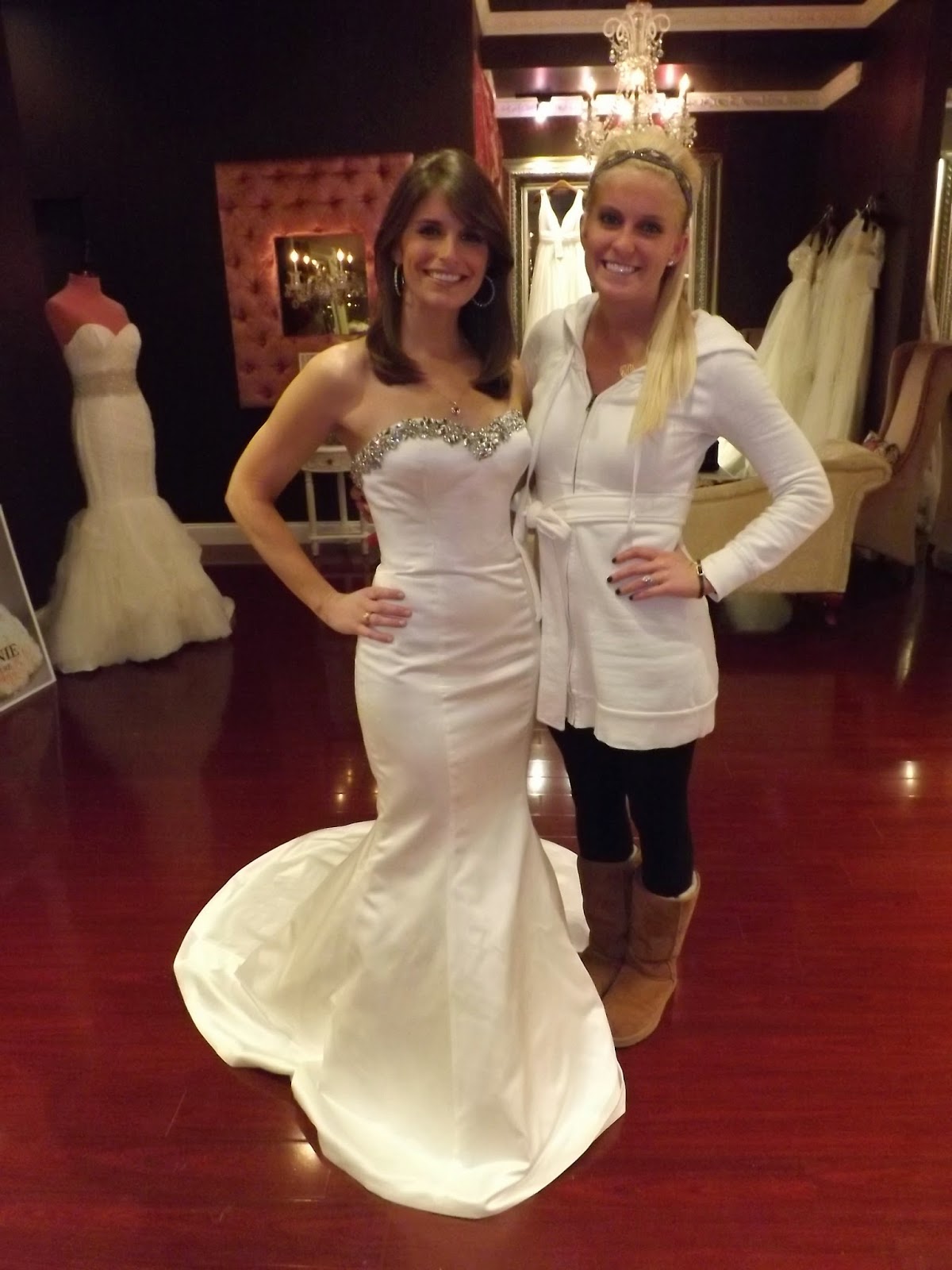 As die-hard "Gossip Girl" fans, it didn't hurt that the style name of my dress is Blair!

I tried on the first two and I liked them a lot, and then I put on the one with the sparkly crystals. I stepped out of the dressing room and looked in the mirror and said, "oh...wow..." I had a completely different feeling than I had in any other dress. We walked over to a larger mirror and we all just basically stood around and stared. In a good way. After staring for quite some time, I finally said, "Can we call you tomorrow and let you know if I want to order it?" My sister then yells out, "No, you are getting this dress tonight. We are not leaving until you order it." She went on to compare it to the Sex and the City dress and to remind me this was exactly the dress I had always wanted. She added, "This is your dress and I'm worried if we leave here, you'll never come back and get it." Whitney was right, as she always is with fashion choices and many other things in life. She's great at making decisions, I'm terrible at it, so I defer to her. I said yes to the dress! 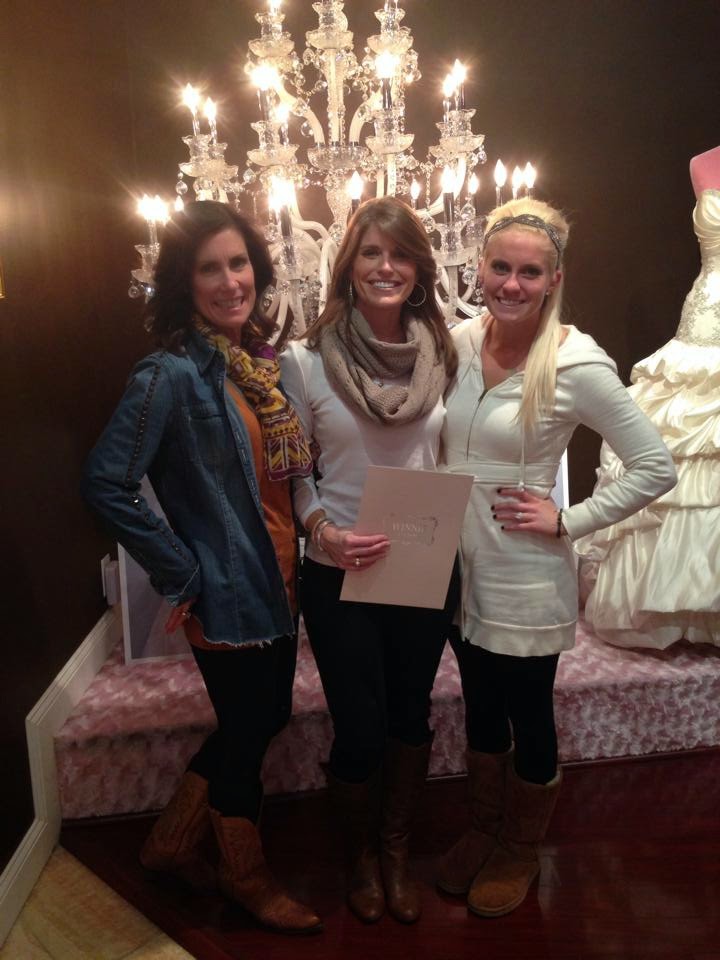 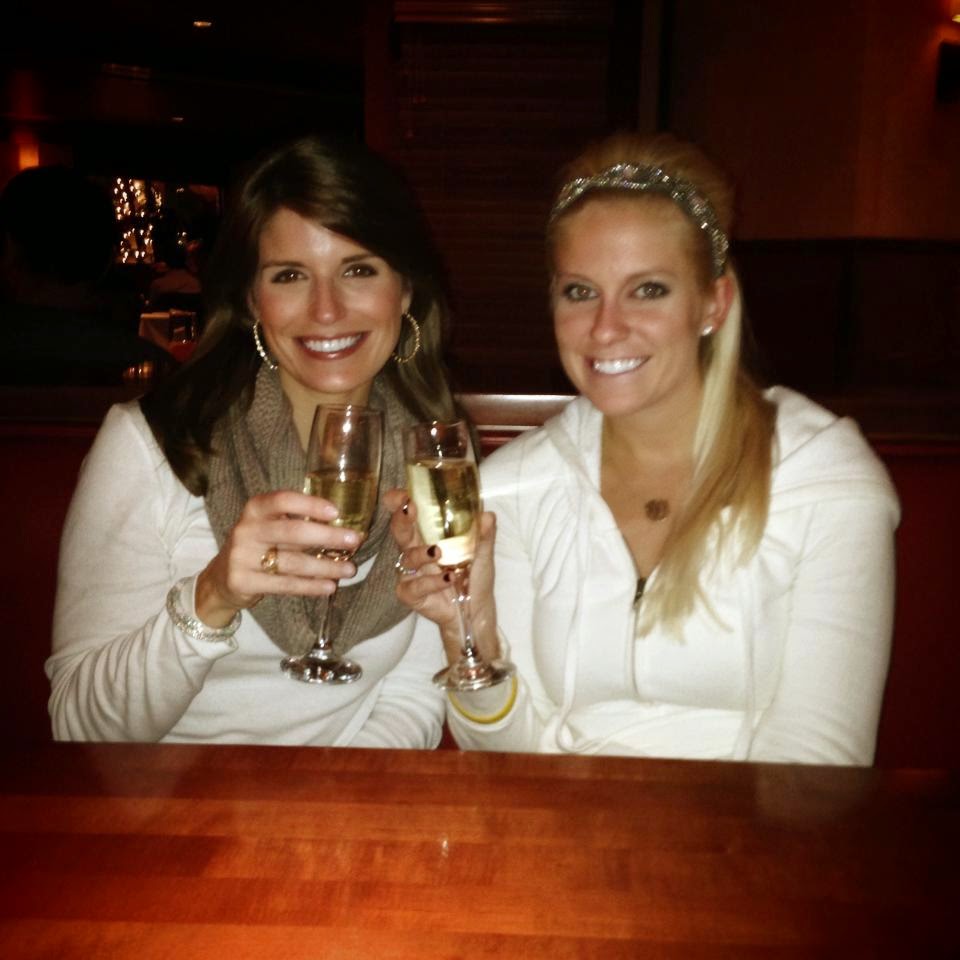 Family Tradition: Celebrating at Bricktops, the same restaurant where my sister celebrated finding her wedding dress!

If you're ordering and not buying off the rack, there are often more decisions to be made: the color (yes, even if you are getting a white dress, there are multiple shades), the embellishments (I added buttons down the back), the cut in the back, the length of the train, etc. Then there is the sizing. Wedding dresses must be made in some bizarro sizing world, because they are not the size you would wear in a normal dress. And of course I was in between sizes. I also had to decide if I wanted "split sizing," (no) and specialized hallow-to-hem sizing (yes). And then you have to add the bustle. Almost all of this costs extra! Make sure to factor that into your dress budget, along with alterations.

After you've just ordered the most special dress of your life, you get to stew about it for months before it comes in, and there is no turning back unless you want to eat hundreds (or thousands) of dollars in deposit money. Not an option for me. Yet that probably won't stop most brides from continuing to turn their heads at every wedding dress they see. I envy those who chose their dress and were 100 percent confident about it from purchase to "I do." But that wasn't me. And not because of the actual dress, but more because of my constant over-thinking and terrible decision-making skills.

For a bride who already has a wedding dress, the enemy is Pinterest. You see all these dresses and think "ooooh maybe I would like THAT one better!" But here's what finally stopped that line of thinking for me: I had visited a few websites with wedding forums --- which, by the way, if you think your wedding is making you crazy, just go to Wedding Bee and you'll find out you're much saner than many other brides out there. On these forums people will post the professional photo of a dress, then one of them in the dress. They do not look the same! Do not trust professional photos of models in these dresses; they are unlikely to look that that in person or look like that on you! There were many instances when I saw I dress I liked online and that realized, "Wait a minute, I tried on that dress and I wasn't wild about it." 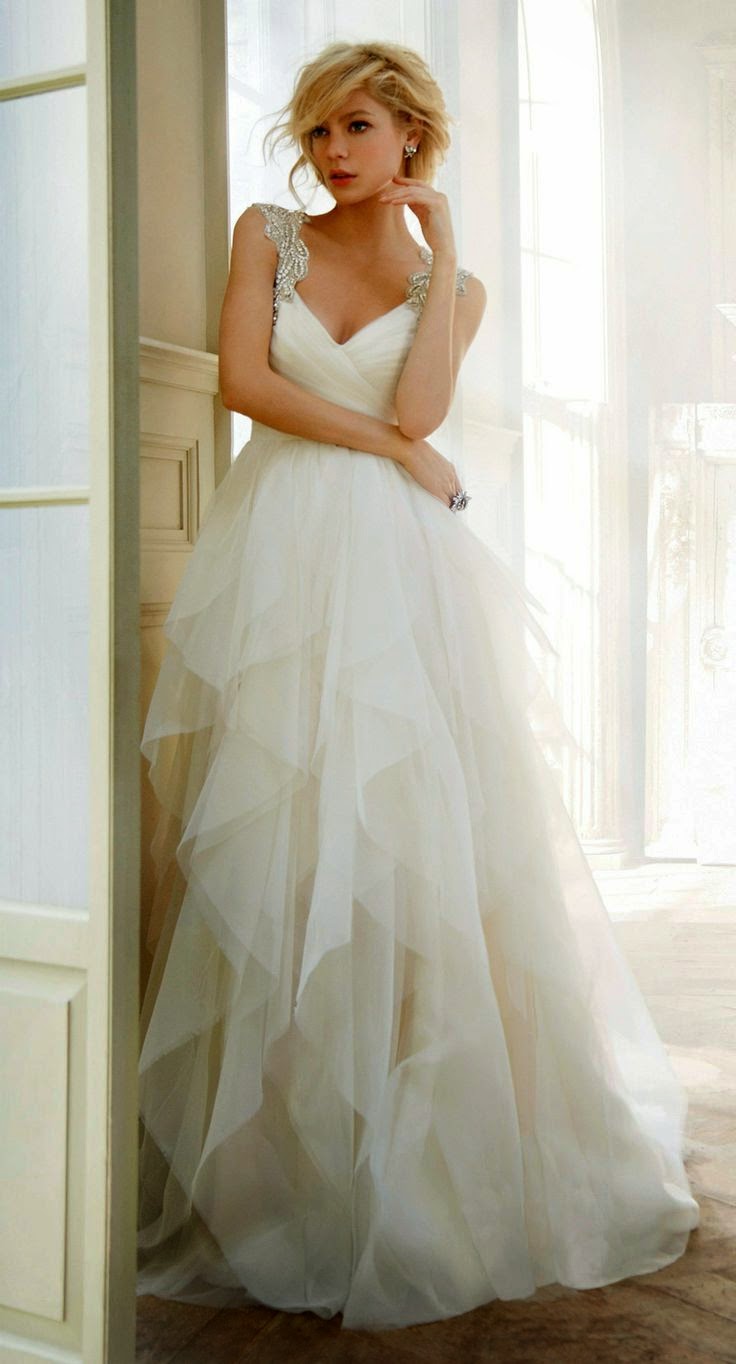 This was one of those dresses I tried on. Beautiful! But not right for me.

Whitney assured me many people go through this dress doubt. She did herself, but in the end, she knew the wedding dress she chose was the one. And that's exactly what happened to me, but not before I had to go through the even more serious affliction of dress anxiety. Once the dress came in, things got even worse because it was too big and needed somewhat major alterations to look the way I had envisioned it. I wanted to be able to fast-forward through alterations to see the finished product, but hello, reality. Patience is a virtue, unless you're a (temporarily) insane bride. 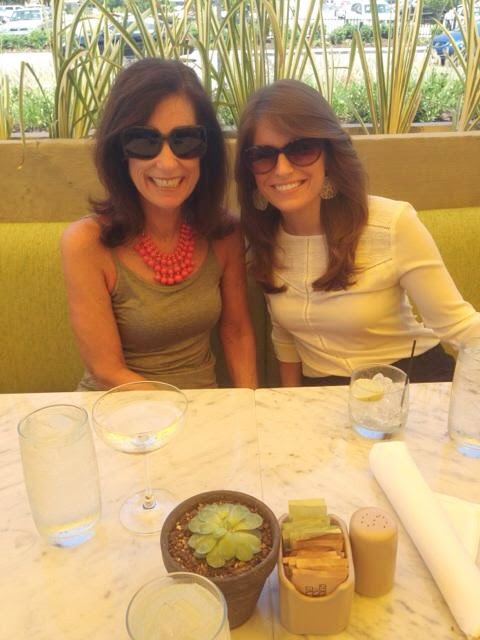 Celebrating at True Food Atlanta and picking up the dress!

Alterations are everything! Everything. A talented seamstress or tailor can totally transform clothing, and that's someone you want on your side when you're getting your wedding dress altered. It's a little scary when you're going through the process because the dress is torn apart in some places and there are pieces just hanging off. But I had total confidence in my seamstress, because she's been doing a spectacular job altering my clothes for a couple years now. Dina, Dina, Dina, you made my wedding dress dreams come true!

At my final fitting, it all rushed back, those special feelings I had the very first time I tried on the dress. All the anxiety disappeared, it looked exactly how I had envisioned it. It was without a doubt, The One.

I think finding the dress you're going to get married in is a lot like finding the person you're going to marry. There are so many out there, how will you ever find the one that fits exactly what you're looking for? Truth be told, you could have probably chosen a few others and been okay, but...when The One comes along, it feels completely different and you just know...and so does your sister :) 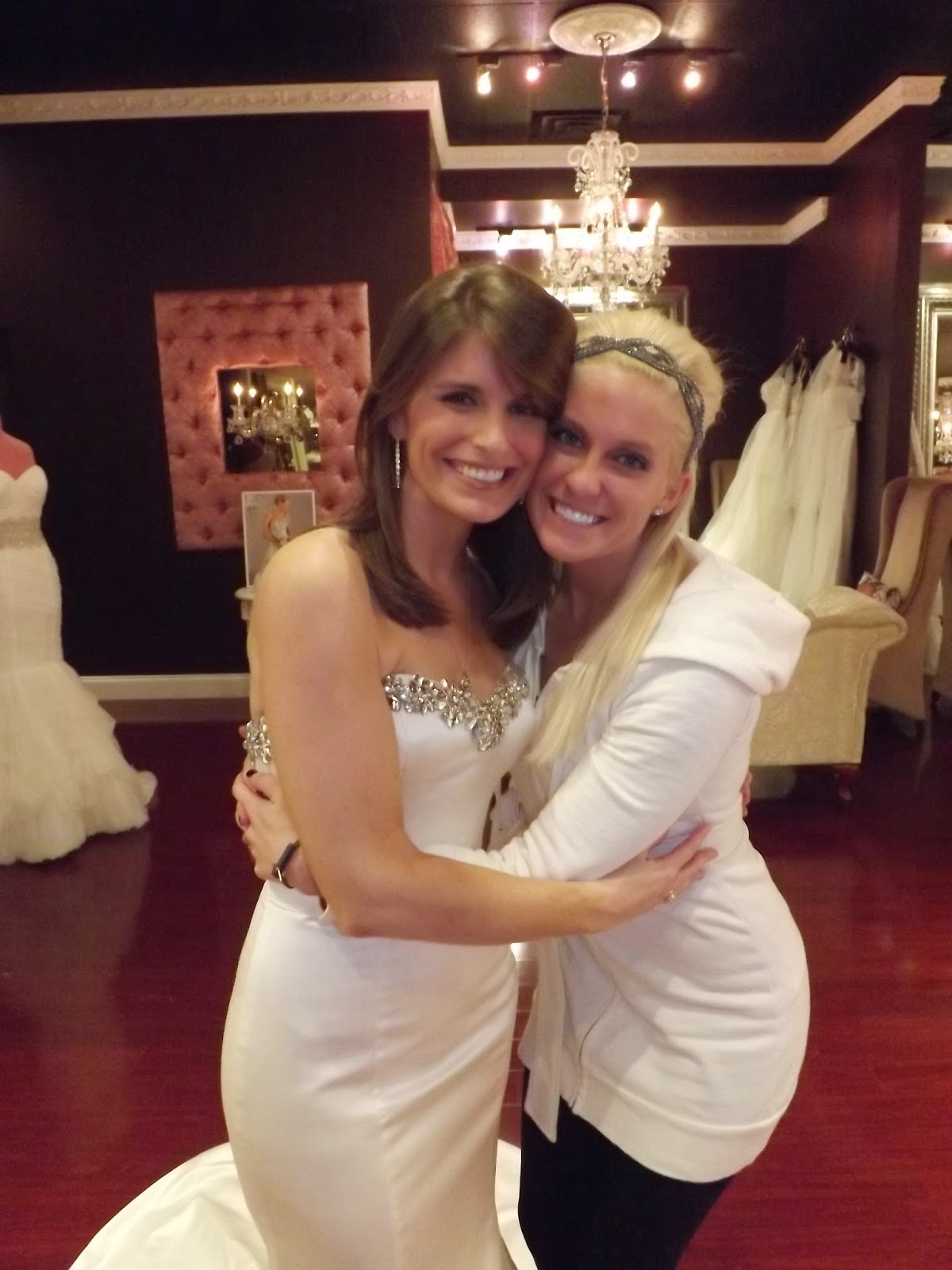