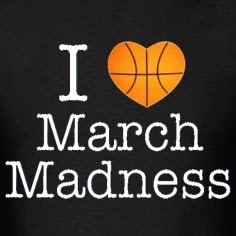 The first day of the NCAA basketball tournament is one of my favorite days of the entire year. I LOVE March Madness. Every year, I research the heck out of dozens of basketball analysts' predictions while making my bracket. I am the two-time reigning champion of the ABC 7 morning show bracket. (I tied last year for first place, but that still counts!)  We don't even do the pool for money, only bragging rights, but for some reason I still go crazy over it. Maybe because I get to not-so-subtly remind the whole crew on air about my victory. I now anchor evenings, but morning show alums are allowed in the pool, so I'm back for a three peat!

I've always loved the tourney, but I think I really started to get into it when Texas A&M went to the Sweet Sixteen. Then a few years later, I worked for a CBS station, so everyone in the newsroom got really excited about the games. Several other reporters and I would all meet up for lunch on the first day of the tournament at a restaurant with lots of TVs and watch basketball.

As much as I love sports, I can't get all that worked up about games unless one of my teams is playing or I have something at stake. A bracket format in which one bad pick can create a ripple effect of disaster for your chances of winning the pool, makes for some pretty high stakes. I think that's what makes the tournament so intriguing and often more exciting than a playoff system. I may or may not have screamed at my computer at work while watching the live stream of a couple of games. My producer and director called it "cute." Maybe, it's just madness.


May your picks be ever in your favor...unless you're in my pool.