In a previous blog post I briefly touched on what seems to be a growing trend of exercise elitism. This week it reared its ugly head again in the form of a piece called "BS Meter" in Self magazine. The magazine ran a picture of two women running the L.A. marathon wearing super hero shirts and tutus. One of the women was battling brain cancer and going through chemo, yet still managed to RUN A MARATHON! But Self didn't take the time to research that. The magazine did ask the runner, Monika Allen, for permission to print the photo. Allen (pictured on the right in the photo below) didn't ask the magazine in what context the photo would be used, but she assumed it would be positive. That makes sense since it is a women's health and fitness magazine; two women running a marathon seems like something the magazine would feature in a positive light. Not the case: 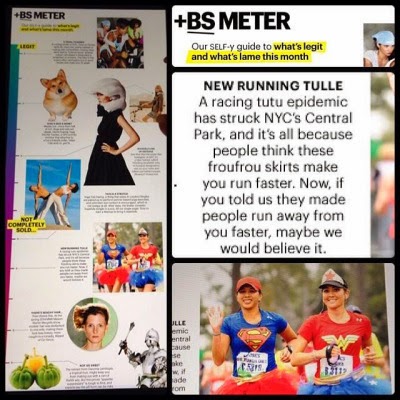 To make matters worse, the tutus are for a good cause. Allen is the co-founder of Glam Runner, an organization that sells these tutus to raise money for Girls on the Run - an organization that teaches young girls the importance of health, self confidence, diversity and compassion through running.

Self's editor-in-chief Lucy Danzinger has apologized for what she calls a "stupid mistake." She told USA Today, "I had no idea that Monika had been through cancer. It was an error." Yes, it was! But even if Monika had not been through cancer, I feel like this piece would have still been an error. A health and fitness magazine should be ashamed for categorizing running a marathon as "lame" no matter what the attire!

I'll be the first to say I'm not really a fan of tutus, except on babies and ballet dancers. I wouldn't wear one, and I definitely would not run in one. I've seen many people running races in tutus and have often questioned how they do it, but I have never judged them for it. To each his own! I prefer to run in the least amount of annoying material possible, but if you can run 26.2 miles in tulle, more power to you! And even more power to Monika Allen, who is beating cancer, raising money and inspiring plenty of others in the process.

But the thing is, it's not just tutus. There's a perception among some that you need to exercise in over-priced, trendy work out attire, especially made by a certain company (that I will not mention here.) Or that only super-grueling, or super-expensive, workouts are legitimate. Let's stop making exercise exclusive. Instead let's start celebrating and embracing everyone's efforts to improve their health and fitness. So throw on that old t-shirt, get out there and do it. I'll be proud of you!
Posted by HAW at 12:30 AM