A pig, Jimmy Kimmel and my 15 seconds of fame 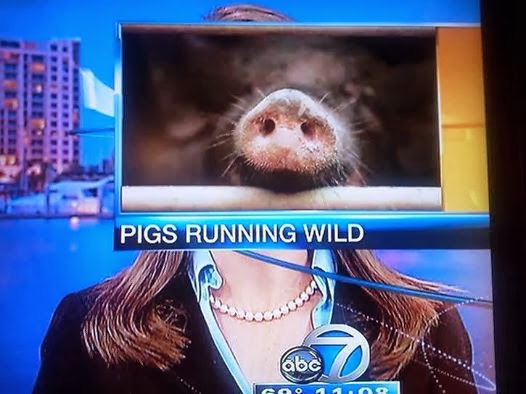 But that's exactly what happened to me on "Jimmy Kimmel Live" Tuesday night. My station, ABC 7 in Sarasota, and I received Kimmel's Excellence in Reporting award, which, of course, is awarded to not-so-excellent journalism.  On our 11 p.m. newscast Monday, an over-the-shoulder graphic of a pig's face with the words "PIGS RUNNING WILD" mistakenly ended up right on top of my face while I was anchoring. I held back laughter as I read the rest of the story. Our crew was disheartened by the blooper, but one of our co-workers Facebook messaged us a screen grab photo and we got a pretty good laugh out of it. My director remarked he was glad it was sent in a private message instead of posted publicly for people to laugh at my/our expense. That was going to be the end of it. Until...just as I was about to leave the station and go home for the night, I said to my director, "You know what, I think I'm going to post it on Facebook. I think we could use a laugh; people will probably get a kick out of it." He chuckled and said to feel free to tag him in the post.

It was definitely not my network news reporting debut, but it was something! It was fun and a reminder about the power of social media. I've long been a Jimmy Kimmel fan, so hearing him say my name on his show was probably coolest thing about the whole experience.